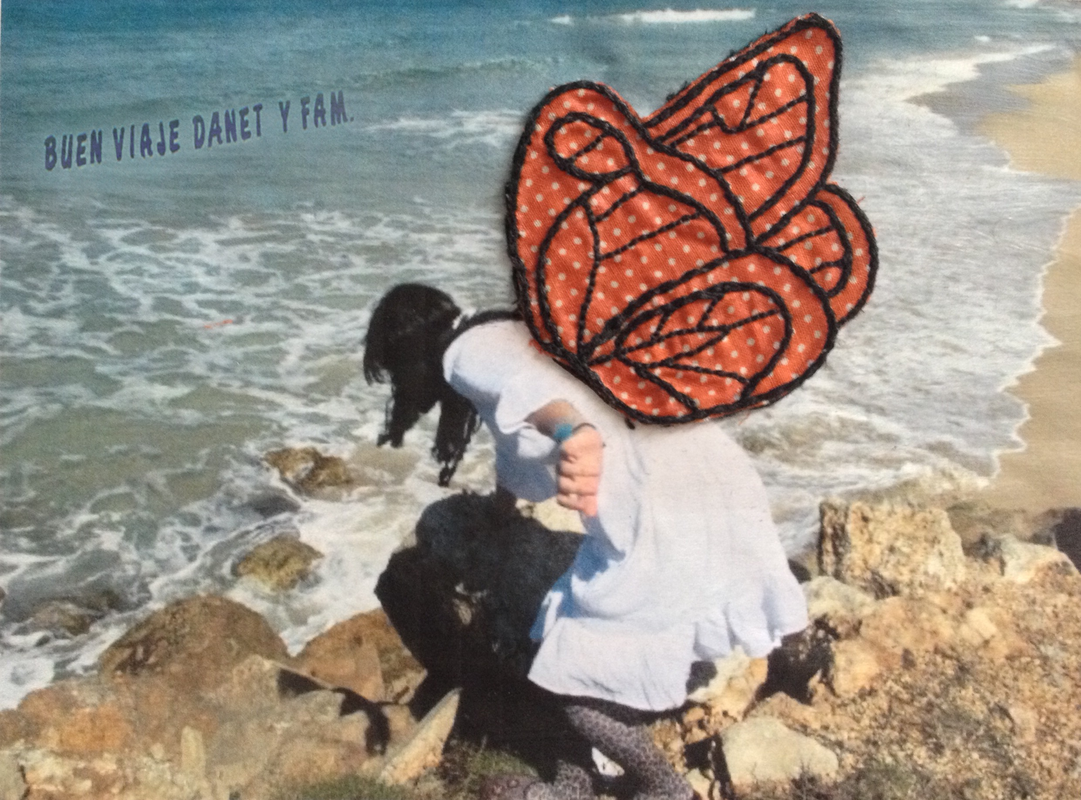 This collage was inspired by Favianna Rodriguez's "Migration Is Beautiful." The collage consists of two pictures: a picture of a farewell sign made for our family before we migrated and a picture of me as a teenager at a beach in Aguadilla, Puerto Rico during a visit. The collage also consists of embroidered butterfly wings resembling the wings of the monarch butterfly, which has become a symbol for migrants.
I’m not sure how to share my migration story, despite the fact that I reflect over it at least once a week in one way or another. Even though many years have past since my migration to the States, I carry that experience with me everyday, refusing to let go. Along with carrying my experience as a migrant, I carry my experience of being a Caribbean Latina, making me part of the fastest growing population in this country that is constantly debated over. I consider every Latinx, no matter where they were born, to be an embodiment of Latinoamérica, its history, its issues, and its legacy, and I believe that I, like all Latinx migrants, am an embodiment with new characteristics to an already complex existence.

I was born in Puerto Rico in 1990 and migrated to the States in 1997. Puerto Rico was all I knew then; even after learning that there is a world beyond what I knew, I couldn’t imagine it. I had family that lived in the States, including a brother, but whenever I tried to imagine the type of place they lived at, all I could see was darkness or static. I lived in a small town called Sabana Grande located in the southwest region of the island. I was literally raised by a village, as my family on my father’s side was one of the bigger families of the town, with relatives owning several local businesses. As my parents worked and went to school, I was taken care of by many relatives, mainly my grandparents on both sides of my family. Aside from my hometown, I spent a good amount of time in a city called Aguadilla where my maternal grandparents lived. I spent my free time like most other children, playing, watching cartoons, and so on, but what I remember the most is being outside. Since leaving Puerto Rico, I haven’t lived in an environment like that of the island so I often think of the moments I laid in hammocks, chased chickens, looked over the edge of a mountain while driving in a steep and narrow road, and many other moments I can’t have anymore.

After visiting Disney World in 1994 shortly after my sister was born, I created an idea that the States was a place with more fun to offer. I was happy in Puerto Rico but I was a restless child. I wanted to visit new places and experience things I never had, such as snow, so it felt like a wish come true when my parents announced we would be moving to Texas. My father felt that being a doctor in the States would bring more prosperity than being a doctor in Puerto Rico. Leading up to the move, I grew more excited and daydreamed about the easy access to theme parks and other exciting things I learned about through movies and TV shows. I don’t remember much perpetration aside from my parents having me watch Disney movies in English. For years, I thought my parents avoided talking to me about what hardships I would face but at this moment of reflection, I believe that my mother tried to and I just wasn’t listening. I remember her crying as she was saying her goodbyes and again as our plane was taking off; at the time, I thought she was being silly and dramatic and wondered how she couldn’t be excited like I was.

We moved to Texas in the middle of the summer so the beginning of my migration felt like a vacation. Eventually, school began and that’s when I began to get the full immigrant experience. The Texan town was very small and two hours away from San Antonio, which we would visit during many weekend. Since it was a new environment with new people, I wasn’t allowed to walk around in the neighborhood or meet many people outside of school so I started feeling isolated. When I started school, I felt even more isolated. The only thing I remember from that first day of school was being introduced to my classmates by my new teacher, a Mexican woman who was able to speak Spanish with me. After the introduction, a couple of students talked to me, the ones who could speak Spanish, and that was a relief for me.

Before moving to Texas, I was indifferent to school; after moving to Texas, school became my first source of anxiety. Even with a couple of people being able to talk to me in Spanish, I was in a constant state of confusion and frustration. I didn’t understand what was going on around me, what was being said, what was expected of me but I knew that I needed to learn English if I was going to survive. I somehow came to believe and fear that if I didn’t learn English as quickly as possible, I would end up on the streets; by the age of 8, I learned to be apprehensive about becoming a failure. That anxiety was soon accompanied by depression, resentment, and feeling homesick; I reacted in various ways to these emotions. Some days I wanted to learn English just to get by in school, other days I wanted to be completely assimilated, and then other days I wanted to completely reject this new environment. Some days I hated all of my classmates; other days I wanted nothing more than to be accepted by the same classmates that called me stupid. Many days, I would come home crying and begging to go back to Puerto Rico and every time I was told that this is my new home. I felt like I was being locked up in a constricting box and I could hardly breath.

Eventually, I was able to speak English, got used to my new home, and gained new customs to partake in. When I was 11, I moved back to Puerto Rico for half a year but was quickly disappointed. By that time, my Spanish became broken and I couldn’t express myself the way I once did. I was a different child and Puerto Rico was a different place; I became a stranger to my own home and family. Since then, I have moved around various times and have had different experiences. All these years, I have been trying to put the broken pieces back together to figure out who I really am. At this point, I know I am still part of Latinoamérica but a different part, its diaspora. Belonging to the Latin and Caribbean diaspora has given me a new perspective on what it is like to be a Caribbean and Latina in this country and in this world. As of right now, I am dedicated to connecting and helping those in the diaspora, especially students.